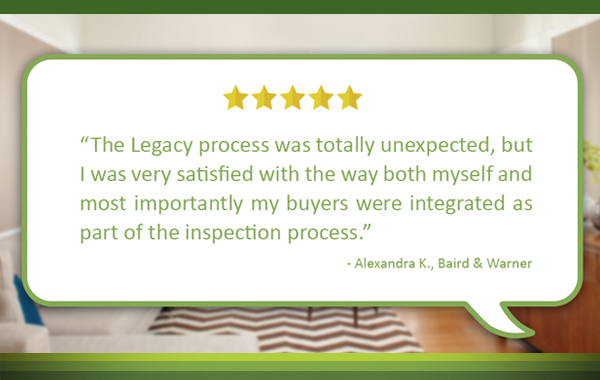 From one realtor to another…

This is my 25th year in the business of selling real estate and I had not yet worked with Legacy Inspection Group. But when I had a buyer choose a home in Gurnee I decided to ask a manager of a local branch in my company, Baird & Warner, if they had a referral for a good inspection company. I have worked with a couple of inspectors for many years that are mainly based quite a bit south of Gurnee, so I just decided to try something new. The process was actually totally unexpected to me the way that Legacy conducts their inspection. I’m not sure if this is the way they conduct all their inspections, but I was very satisfied with the way both myself and most importantly my buyers were integrated as part of the inspection process. From the start, just calling to schedule the inspection was a pleasure. How nice and incredibly professional my call was taken, and how fast the response was to scheduling and confirming the inspection.

The home is approximately 4000 ft.², over three floors above ground and has a very tall roof line. I was early for the inspection time and I was pleased to note so was Legacy. Unbeknownst to me, there were going to be three inspectors at our property today. They work as a team. How incredibly professional all three of them were in their manner, attitude and even appearance. They explained everything they were going to do during the inspection. Inspected everything thoroughly, documenting as they went along on their three Laptops, met with myself and the buyers to then walk us through the home and point out everything important to the inspection, and also important to my clients in terms of direction and maintenance of many items in the home once they move in.

I have to say that I was impressed and extremely thankful that the roof was inspected as well, as I was quite surprised to look up to see one of them standing at the highest point of the roof, three stories above ground. They also truly and thoroughly inspected the exterior of the home, and I would like to add they did it with a fantastic attitude considering it was 99° out (not including the incredibly excessive humidity factor that day).

As thorough as all three inspectors were, I believe because there were three of them, they completed the full inspection within two hours. I am sure normally that inspection would’ve taken at least four hours to do that home. That was a perk as it was half the time that the sellers had to leave their home, the buyers had to take-off from work and yes my schedule is important too.

The new buyers learned so much about the home that day, they were very thankful to have experienced such a great and informative inspection. They were also thankful that the inspectors added that at anytime after they move into the home and have a question about the report or anything that was inspected that they are happy to receive a call and answer any questions.

And as a bonus and completely unexpected, almost immediately after the end of the inspection a full report with summary, commentary and a full set of pictures was in my email box. WOW!

This is by far the longest review I’ve ever left for anyone, but it was completely warranted, and I look forward to referring Legacy to my clients in the future. Thanks again!

Thank you Alexandra for your nice review of Legacy Inspection Group!

Contact us for a quote and to discuss your Home Inspection needs today at 847-217-5958. We service the Chicago area for home inspections, mold testing and radon testing.

All Legacy inspectors are required to teach at our professional training facility in Mundelein Illinois and demonstrate their technical and communication skills by working with novice home inspectors.

Legacy inspectors must be trained at private inspector training establishments.

Our inspectors must be trained in the technical aspects of a home and in the Legacy process.

Every Legacy home inspector must participate in our apprenticeship program completing our basic education course, performing hands on inspections, learning to use our proprietary software and attending our seminars.

Technical knowledge, communication prowess and interpersonal skills are a necessity.

7 years is the average level of experience of a Legacy Inspector.

They are required to go through the Legacy training program and must possess strong professional habits.

Technical knowledge, communication prowess and interpersonal skills are a necessity.